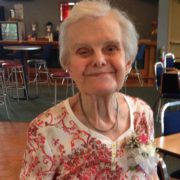 Marjorie (Marge) Jakubowski was born in Canton, Ohio on August 17, 1926, as one of five children, to Harry and Julia (Murray) Harvey of Irish, Dutch, and French descent. Marge was wed to Thomas Jakubowski on June 14, 1952, and they were married for 60 years before Tom’s death in 2013. Marge took pride in her work as the first woman loan officer at Security Bank & Trust until the birth of her first child. With great joy and resilience, she became a loving full-time mom and homemaker to her family of six.

Marge was an avid cribbage player, puzzle lover, pianist, and prolific reader of history, politics, mysteries, and nature amongst other topics. She travelled the United States and many National Parks extensively with her family, and with her husband during retirement, having been to every State except Alaska; Isle Royale in Michigan being one of their favorite places to visit.

Marge volunteered at the Gabriel Richard High School library for many years and at The Information Center in Taylor, Michigan, where she received a Volunteer of the Year award. Marge was a long-time parishioner at St. Patrick’s Catholic Church for over 50 years.

A funeral mass is planned at St. Patrick Catholic Church, 135 Superior Blvd., Wyandotte, Michigan on Saturday, November 6, 2021 – 9:30 a.m. in state and 10:00 a.m. mass. With gratitude, flowers/plants will need to be delivered between 9:00-9:40 a.m. on day of mass only. The family respectfully requests that masks be worn during mass.