During the first quarter of the century, the Catholic population of the areas in and around Wyandotte had grown rapidly and was straining the resources of the existing parishes in the area. Bishop Michael J. Gallagher took steps to relieve the overflow from the mother churches in Wyandotte by establishing St. Elizabeth Church on February 11, 1924, in the recently annexed Ford City section. Fr. John C. Palmer was appointed the first pastor. With no church or rectory out of which to work, Fr. Palmer lived for a short time with his close friend Fr. Fisher in St. Patrick’s rectory until suitable quarters could be found in the parish.

Some of the earliest masses were offered in the Labadie School on Goddard Road until permission was received from the City of Wyandotte administration to use the Community Hall (fire house) on the corner of Biddle and Goddard Road. In a very short time Fr. Palmer established a rectory in a rented house directly behind the Community Hall. Many of the early parishioners were former members of St. Patrick Church and St. Francis Church, Ecorse. Fr. Palmer , to meet the need for Christian education in the community, in 1925 established a parish school. The sisters of St. Joseph, Nazareth had charge. By 1926 funds were gathered by the parish and the church was built on the northwest corner of First and Goodell and served the parish center of worship until early 1955, and then as a parish youth center until it was leveled in early February of 1972. Fr. Palmer resigned from active pastoral work in 1934 and passed away in 1952. Fr. Leo Zindler was appointed pastor of the parish. Fr. Zindler was able to create a surplus of approximately $200,000 which gave the parish a solid financial foundation. From there the school, convent and today’s church was established. Because of the growing number of Italian speaking families settling in the parish, an Italian speaking assistant was assigned in May of 1947. This was Fr. Charles DeSantis. When Fr. Zindler became ill in 1949 he retired and Fr. Bernard Loeher was appointed pastor. Through the years the parish family had grown to over 900 and the need for a larger church became apparent. In 1953 Fr. James McCabe was appointed pastor and through his leadership and motivation, the new church was approved and ground breaking ceremonies took place on July 27, 1954.

In March, 1970, the Parish Council was faced with a most difficult decision concerning the future of St. Elizabeth’s grade school. The Sisters of St. Joseph had announced that they could no longer service our school after the end of the school year. In cooperation with St. Joseph’s and St. Patrick’s, the three schools combined their resources and formed the Wyandotte Catholic Consolidated School System.

On December 6, 1970, the parish witnessed another milestone in its history; the commissioning ceremony of ten laymen as Extraordinary Ministers of the Eucharist. St. Elizabeth was the first parish in Wyandotte, and among the first in the Archdiocese, to use Lay Ministers.

Fr. LaBelle’s pastoral work was short lived, he died in 1971. Fr. Kevin O’Doherty was appointed administrator of the parish until the newly appointed pastor, Fr. George Fortuna was announced on April 14, 1971.

In the Fall of 1972, the parish school situation further deteriorated as enrollments continued to decline. After careful deliberation and considering the welfare of the total parish community, the Parish Council voted to withdraw from the Wyandotte Catholic Consolidated School. So, with much sadness, our parish school was once again forced to close its doors just as it had done forty-four years ago.

The spirit of Christian renewal touched St. Elizabeth Parish in a special way in May of 1973, when a Charismatic Renewal Prayer Group was established in the parish. In 1976 Fr. Fortuna was retiring and he introduced Fr. Charles Morris to the parish. Fr. Charles continued with the Charismatic movement, since some of the parishioners were devoted and faithful to the Holy Spirit leading them to work for the good of the church.

Through the following years, Fr. Charles continued the great traditions of the parish and strengthened the Together in Faith movement.  From the Italian roots of the church to the witness of the charismatic renewal. Although the parish was down to only 220 households, what a witness they made.

In 2008, the parish clustered with St. Francis Xavier in Ecorse with the Together in Faith program. That cluster remained for 3 years until Fr. Charles was asked to be administrator at St. Patrick Parish in Wyandotte, after Fr. Ray was reassigned.  In 2010, the clustering process had started between St. Elizabeth, St. Patrick and St. Joseph. In 2012, the merging of St. Elizabeth, St. Patrick and St. Joseph began and on July 1, 2013, the new parish of St. Vincent Pallotti was established. Unfortunately, it meant the closing of St. Elizabeth. Fr. Charles was reassigned to another church and the pastor at St. Joseph, Fr. Michael Cremin, SAC, became the pastor of the new parish.

The name of St. Elizabeth carries on in the community with Fr. Michael renaming the former school building of Wyandotte Catholic Consolidated School to the St. Elizabeth Education Center. Today the building is used for Religious Education classes, RCIA, prayer groups and other church activities. 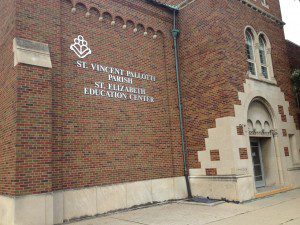