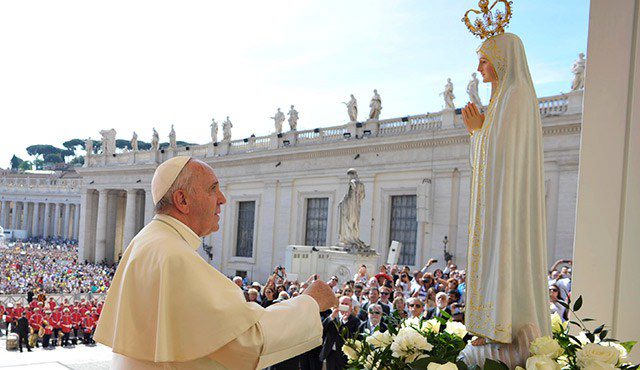 The story of Our Lady of Fatima

During World War I, Pope Benedict XV made repeated, but forlorn, pleas for peace. Finally, in May 1917, he made a direct appeal to the Blessed Mother to intercede for peace in the world. Just over a week later, Our Lady began to appear at Fatima, Portugal, to three shepherd children: Lucia dos Santos, age 10, and her cousins Francisco and Jacinta Marto, ages 9 and 7. However, it was in the previous year, 1916, that the children had their first supernatural encounters with an Angel as a means of preparing them to receive the Queen of Heaven.

The Angel of Portugal

In the spring of 1916, as the three shepherd children tended their sheep in a property called Old Chousa, a drizzling rain began to fall, so they climbed the hill to find shelter in the crevices of a rock. Suddenly a strong wind began to shake the trees. They looked up and saw coming toward them a dazzlingly beautiful young man, seemingly made of light, who told them, “Do not be afraid. I am the Angel of Peace. Pray with me.”

Kneeling on the ground, he bowed down until his forehead touched the ground and had them repeat three times: “My God, I believe, I adore, I hope and I love you. I ask pardon for those who do not believe, do not adore, do not hope and do not love you.”

Then, rising, he said, “Pray thus. The Hearts of Jesus and Mary are attentive to the voice of your supplications.” Leaving them absorbed in a supernatural atmosphere, the angel disappeared.

The angel appeared to them again later in the summer and in the fall, encouraging them to pray and to make sacrifices for the reparation of sin.

The first apparition of Mary

On May 13, the three children took their flocks out to pasture in the area known as the Cova da Iria. There they suddenly saw a bright flash of light in the clear blue sky.

They looked up to see “A lady, clothed in white, brighter than the sun.” She said, “Do not be afraid, I will not harm you. I come from heaven.” She asked them to come to the Cova for six months on the 13th day of the same hour

She ended the visit by saying, “Say the rosary every day to obtain peace for the world and the end of the war,” and began to rise serenely towards the east until she disappeared.

Mary continued to appear to the children throughout the months, and encouraged the children to pray the rosary for the reparation of sins and the conversion of Communist Russia. As word spread, large crowds gathered to witness and pray.

The children said they had been told a three-part secret. Lucia wrote down the third part of the secret at the order of her bishop, but it was not divulged until 2000, just after the beatification of Jacinta and Francisco.

The Vision of Hell — First Part of the Secret

As she spoke these words she opened her hands. The light seemed to penetrate the earth and we saw, as it were, a sea of fire. Plunged in this fire were demons and souls in human form, like transparent burning embers, all blackened and burnished bronze, floating about in the conflagration, now raised into the air by the flames that issued from within themselves, together with great clouds of smoke, now falling back on every side like sparks in huge fires, without weight or equilibrium, amid shrieks and groans of pain and despair, which horrified us and made us tremble with fear. The demons could be distinguished by their terrifying and repellent likeness to frightful and unknown animals, black and transparent like burning coals. Terrified and as if to plead for succor, we looked up at Our Lady, who said to us so sadly:

“You have seen hell where the souls of poor sinners go. To save them, God wishes to establish in the world devotion to my Immaculate Heart. If what I say to you is done, many souls will be saved and there will be peace. The war is going to end; but if people do not cease offending God, a worse one will break out during the pontificate of Pius XI. When you see a night illumined by an unknown light, know that this is the great sign given you by God that He is about to punish the world for its crimes, by means of war, famine, and persecutions of the Church and of the Holy Father.

To prevent this, I shall come to ask for the consecration of Russia to my Immaculate Heart, and the Communion of Reparation on the First Saturdays. If my requests are heeded, Russia will be converted and there will be peace; if not, she will spread her errors throughout the world causing wars and persecutions of the Church. The good will be martyred; the Holy Father will have much to suffer; various nations will be annihilated. In the end, my Immaculate Heart will triumph. The Holy Father will consecrate Russia to me and she will be converted, and a period of peace will be granted to the world.”

The Call to Penance — Third Part of the Secret

Obeying an order from her bishop, Sister Lucia wrote the last part of the secret on January 3, 1944. It was not made public until the year 2000, after the beatification of Jacinta and Francisco:

“At the left of Our Lady and a little above, we saw an Angel with a flaming sword in his left hand; flashing, it gave out flames that looked as though they would set the world on fire, but they died out in contact with the splendor that Our Lady radiated toward him from her right hand. Pointing to the earth with his right hand, the Angel cried out in a loud voice: ‘Penance, Penance, Penance!’ We saw an immense light that is God, something similar to how people appear in a mirror when they pass in front of it, a bishop dressed in white (we had the impression it was the Holy Father), and other bishops, priests and men and women religious going up a steep mountain, at the top of which there was a big cross of rough-hewn trunks as of a cork tree with the bark. Before reaching there, the Holy Father passed through a big city half in ruins, and half trembling with a halting step, afflicted with pain and sorrow, he prayed for the souls of the corpses he met along his way. Having reached the top of the mountain, on his knees at the foot of the big cross he was killed by a group of soldiers who fired bullets and arrows at him, and in the same way there died one after another the other bishops, priests, men and women religious, and various lay people of different ranks and positions. Beneath the two arms of the cross there were two Angels each with a crystal aspersorium in their hand, in which they gathered up the blood of the martyrs and with it sprinkled the souls that were making their way to God.”)

The Miracle of the Sun – during the October apparition

The greatest miracle to occur since the resurrection is also the only miracle ever precisely predicted as to date, time of day and location. It is popularly known as “The Miracle of the Sun” and October 13, 1917 has come to be known as “The Day the Sun Danced.” The miracle was viewed by 70,000 or more people at the Cova that day, and is reported to have been seen from as far as 25 miles away. Doubters and skeptics had become believers. Even the secular newspaper O Seculo’s chief reporter, Avelino de Almeida, who had written satirically before, now reported affirmatively, and stood by his story later on in spite of harsh criticism.